Turn spinach artichoke dip into a satisfying meal or side dish with these stuffed portobello mushrooms.

I have always had an affinity for spinach and artichoke dip. If it's on the menu at a popular chain restaurant, I'm all in. If it's served at a party, you'll find me by the snack table!

So, to cure my cravings, I like incorporating these flavors into other dishes - such as risotto, pasta, or eggs - and now these spinach artichoke stuffed portobello mushrooms.

The mushrooms are meaty and satisfying. The filling is creamy and cheesy. Together they are delicious as both a main dish and a side dish.

TIP: Mushrooms should never be washed because they will absorb too much water and become soggy.

Should you remove the gills of portobello mushrooms before cooking?

While the gills are technically edible, most prefer to remove them because they can have a bitter taste. The dark color of the gills will often turn the rest of the dish a muddy brown color, which isn't very appetizing.

How do I keep stuffed mushrooms from getting soggy?

Always clean mushrooms with a damp cloth. If washed with water, they act like sponges and will become waterlogged.
Secondly, pre-bake mushrooms to release some of their moisture before adding the stuffing.

What do I serve with stuffed mushrooms?

As a main dish for lighter appetites: Serve with a green salad and garlic bread for dinner or pair with fruit salad for brunch.
As a side dish for hearty appetites: Serve alongside beef, chicken, pork or fish.

Try these recipes next

Subscribe to My Casual Pantry to get the latest recipes and ideas sent directly to your inbox. 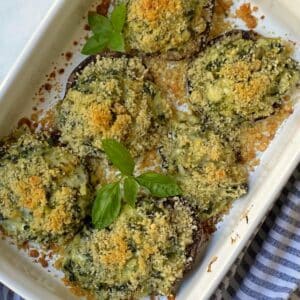