Ground Turkey Enchiladas are layered and served in a skillet with no rolling required.  Ground turkey is combined with roasted peppers and onions and a healthy dose of cheese for a delicious all-in-one dish.

Mexican food is very popular in our house and I love creating our favorite dishes in skillet form.  Especially enchiladas, because that means no rolling is required!  I'm really loving this version because it isn't overly heavy.

These enchiladas are lightened up with ground turkey and plenty of roasted peppers and onions.  There is cheese, of course, and tortillas, and the most scrumptious enchilada sauce.

How to make Turkey Enchiladas

These enchiladas are filling and satisfying and I love to serve a green salad alongside.  Leftovers - there usually aren't any in our house - should be refrigerated and will reheat well in the microwave. 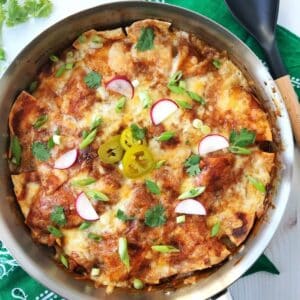