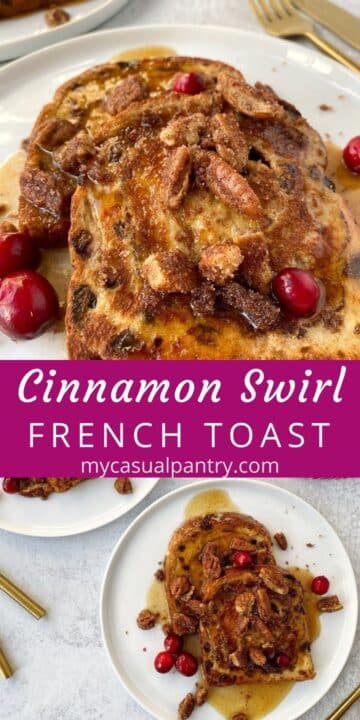 This Cinnamon Swirl French Toast is bursting with cinnamon in every bite, starting with cinnamon raisin bread.  Cinnamon sugar-coated pecans add crunch while cinnamon-vanilla syrup is the crowning touch. A wonderful weekend breakfast or brunch dish.

This french toast tastes like a warm hug - bursting with cinnamon in every bite. The cozy vibes are perfect alongside a hot mug of coffee - the perfect way to start any day.

Add half-and-half or cream to the eggs for richness.  This creates a rich custard.  Whole milk can also be used.  I don't recommend using low-fat milk.  The higher water content will dilute the custard and won't yield a rich, creamy mixture.

Don't oversoak the bread in the custard mixture.  The bread should soak up enough egg mixture to penetrate the inside, but not enough to turn soggy.

Use medium-low to medium heat to fry the french toast.  I like using butter for flavor, so keeping a lower temperature prevents the butter from burning.  If making larger batches, wipe out the pan in between batches to avoid later batches from taking on a burnt butter flavor.

Can I freeze french toast?

Absolutely!  Fry the french toast and allow it to cool completely.  Place in a freezer-safe bag with parchment paper in between the slices of toast.  Store in the freezer for up to two months.

How do I reheat french toast?

In the oven:  place on a sheet pan fitted with a rack.  Bake at 375 degrees until warmed through, approx. 8-10 minutes.  The rack allows the heat to circulate so the bottom of the french toast doesn't become soggy.
In the toaster oven:  for 1 or 2 servings, place toast on the rack in the toaster oven and cook for 1 or 2 toast cycles until warm.

Cinnamon swirl french toast is full of comforting vibes and is perfect for Christmas morning... or any winter weekend morning.  This dish is like a warm hug. 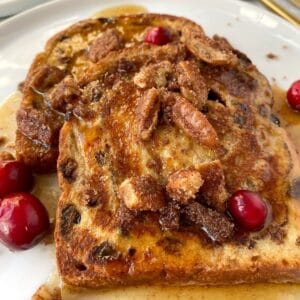 For larger batches, transfer the cooked french toast to a sheet pan fitted with a rack.  Keep warm in a 170-200 degree oven while cooking the remaining batches.

Welcome! I'm Abbey - the coffee-centric foodie behind My Casual Pantry.  I love casual, comfortable food - the food I share with my family on a daily basis, the food we build memories around.  I'm here to share my love of food with you and provide you with recipes to build memories with your family.