Buffalo Cauliflower Naan Wrap:  roasted cauliflower tossed in a spicy sauce and wrapped in naan bread.  A delicious alternative for lunch or dinner.

Roasting is my favorite way to prepare cauliflower.  Roasting caramelizes the cauliflower and leaves it firm, but tender, not mushy.  This wrap features the roasted cauliflower as the star ingredient.  Tossed in spicy buffalo wing sauce, the cauliflower is wrapped in naan bread and garnished with all of the fixings:  baby greens, scallions, cilantro, and blue cheese dressing are my favorites.

Loaded with flavor, this buffalo cauliflower wrap is light but satisfying.  It's a delicious way to change up the sometimes dull weekday lunches.  Best of all, this recipe is easy to make.  The cauliflower roasts in 20 minutes which is enough time to prep the rest of the ingredients.

If you love cauliflower and spice, you will love this wrap.  If you're not a big fan of cauliflower, this recipe will most likely convert you!  It's loaded with vegetables yet tastes indulgent at the same time.   Change up your lunchtime sandwich routine and try this Buffalo Cauliflower Naan Wrap. 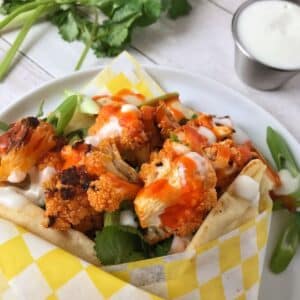