Corn Panzanella Salad with Garlic Toast Croutons is a twist on the classic.  This version pairs grilled corn and garlic toast croutons with tomatoes, red onion, and a red wine vinaigrette.

My obsession with sweet corn continues.  I like finding new ways to incorporate this seasonal gem into recipes.  I love to grill the ears of corn, slice the kernels off of the cob, then add this charred corn to various recipes for a pop of color and flavor.

Today, I'm giving Panzanella salad a corn makeover.  Grilled sweet corn is a delicious addition to the classic flavors of Panzanella.  Traditionally, Panzanella salad combines bread and tomatoes, often with onions, sometimes cucumbers, and a vinaigrette.  (This BLT Panzanella is a delicious option too!)  But corn isn't the only twist in this salad.  For the bread component, I made croutons from garlic toast.  The frozen garlic toast bakes up quickly and adds loads of flavor to the salad.  The buttery croutons pair perfectly with the sweet corn, and they are crispy on the outside and chewy on the inside.

This salad is easy to make and with so much great flavor, this is sure to be a staple on your summer table.

Corn Panzanella Salad is a great dish to serve for lunch but is equally delicious as a side dish to grilled chicken or steak.  I hope you love this recipe. 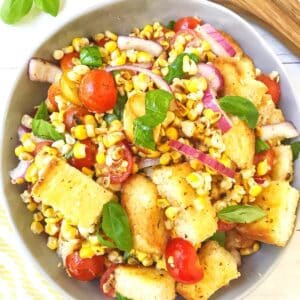