Spaghetti Squash with Creamed Spinach and Pancetta pairs the sweet squash with a creamy filling of spinach and pancetta.  A light yet satisfying, warm and comforting dish.

I remember the first time I had spaghetti squash.  It was years and years ago, but I still remember its unexpected sweetness.  Spaghetti squash has a mild flavor so it pairs well with many different flavors and is a great way to lighten up dishes by using it in place of pasta or other starches.

This dish pairs creamy spinach with the squash.  Crispy pancetta adds a meaty bite and the stuffed squash is topped with fontina cheese and broiled until melted and bubbly.

How do I Prepare Spaghetti Squash?

When the squash is done roasting, scrape the flesh with a fork and add it to the spinach mixture.  Stir to combine and add back the pancetta, reserving some for the top.  Spoon the mixture back into the squash boats and top with more Fontina cheese.  Broil for a few minutes until brown and bubbly.  Garnish with remaining pancetta.  Serve.

How to serve Spaghetti Squash

This recipe serves two as a main dish or four as a side dish.  This recipe can easily be doubled (or tripled) for larger groups.  For a vegetarian option, simply omit the pancetta.  Leftovers reheat well in the microwave.

This dish is light and satisfying all at the same time.  It's warm and comforting, perfect for cold fall days.

More recipes you may enjoy 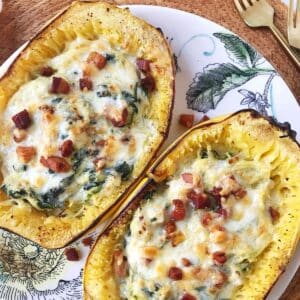 Welcome! I'm Abbey - the coffee-centric foodie behind My Casual Pantry.  I love casual, comfortable food - the food I share with my family on a daily basis, the food we build memories around.  I'm here to share my love of food with you and provide you with recipes to build memories with your family.