This Loaded Potato Gnocchi Soup is filled with everything you love about a loaded baked potato. This bowl of comfort is perfect for lunch and satisfying enough for dinner.

Table of Contents show
Why you will love this
Ingredients
How to make
Serving ideas
How to store and reheat
Faq's
Equipment
Craving more?
More soup recipes
Loaded Potato Gnocchi Soup

Why you will love this

This soup is comfort food in a bowl. It's everything I love about a loaded baked potato - the creamy potato; melty cheese, smoky bacon, and cool sour cream. It's rich and satisfying... a meal by itself.

Loaded potato gnocchi soup is quick and easy to prepare. Quick-cooking gnocchi helps this soup come together faster than oven-baking a potato. With readily available ingredients, soup is a fuss-free way to get dinner on the table fast.

The toppings are the best part! I love to garnish this soup with all of my favorite baked potato toppings - cheese, bacon, sour cream, and scallions. Diced ham and chives are great options too!

Don't forget the garnishes. Add your go-to baked potato toppings like cheese, sour cream, and chives. The garnishes are the best part!

Top you own soup bar - set out assorted baked potato toppings so everyone can customize their own bowl of loaded potato soup.

Serve for lunch or dinner alongside a grilled cheese, garlic bread, or with a garden salad.

How to store and reheat

Store the soup in an airtight container in the refrigerator for 3-4 days. Store the toppings separately. Reheat in the microwave until hot. Garnish with toppings.

Will gnocchi fall apart in soup?

Shelf-stable or frozen gnocchi does not fall apart in this soup. Homemade gnocchi may fall apart if it isn't made with enough flour.

Is gnocchi a potato or pasta?

Gnocchi is not pasta. It is a dumpling made from potatoes. Gnocchi is often served with various sauces, similar to pasta.

Subscribe to My Casual Pantry to get the latest recipes and ideas sent directly to your inbox. 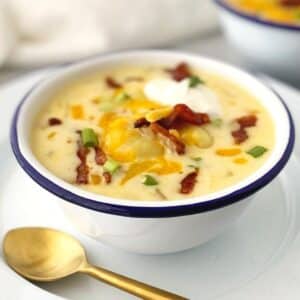 Store the soup in an airtight container in the refrigerator for 3-4 days. Store the toppings separately. Reheat in the microwave until hot. Garnish with toppings.

This was post was originally published in January 2019 and has been updated.