Elevate your favorite fall desserts with this Cinnamon ice cream. Infused with the cozy vibes of cinnamon, this creamy treat is just as delicious served in a cone as it is on top of apple pie.

You will love this

Making homemade ice cream is a guilty pleasure of mine! It's rich and creamy and comes together with just a few wholesome ingredients. No additives. Just rich flavor!

Cinnamon ice cream is rich and creamy and perfectly infused with warm spice. It pairs wonderfully with all of your favorite fall desserts.

This ice cream base is made with cream, half-and-half, sugar, and egg yolks. Lots of cinnamon bring tons of warm spice to this ice cream.

PRO TIP: Tempering means to slowly bring the egg mixture up to the temperature of the warm liquid. This helps to prevent the eggs from scrambling.

PRO TIP: When chilling a custard (egg and cream mixture), pressing plastic wrap directly down on top of the mixture prevents a skin from forming.

The warm cozy spice of cinnamon in this ice cream is so delicious no matter how you serve. These are some of my favorite ways to enjoy.

Craving more? Subscribe to My Casual Pantry and get all the latest recipes and ideas sent directly to your inbox. 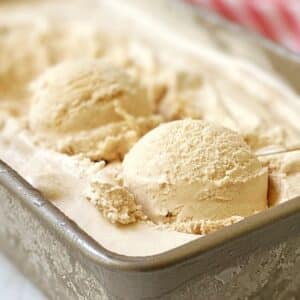 This post was originally published in October 2018 and has been updated.