Molasses Cookies and Cinnamon Ice Cream Sandwiches are a match made in heaven!  Soft molasses cookies with creamy cinnamon ice cream in the middle.  Divine!

I'm one of those people who starts craving Fall once August rolls around...the smells, the flavors, and pumpkin spice lattes!  But the flavors of Fall don't quite fit when it's 85-90 degrees and humid outside.  These ice cream sandwiches are the perfect solution!  A frozen treat is just the right thing on a hot late summer day, and the flavors of molasses and cinnamon bring that touch of Fall.

Molasses cookies have been a favorite in my house for years.  Soft and chewy and full of wonderful warm spices.  My family also loves cinnamon ice cream - vanilla ice cream infused with lots of cinnamon goodness.  Put these two together and it's a match made in heaven.

This recipe makes eight ice cream sandwiches, which means there are leftover cookies (and ice cream) for everyone's snacking pleasure.

These ice cream sandwiches are a huge hit with my family.  The flavor combination scores a 10!  And the extra cookies are delicious with a cup of coffee!  I'm sure these Molasses Cookies and Cinnamon Ice Cream Sandwiches will be a hit with your family too!  If you try the recipe, please leave a comment below and tag me on Instagram @mycasualpantry so I can see your creation. 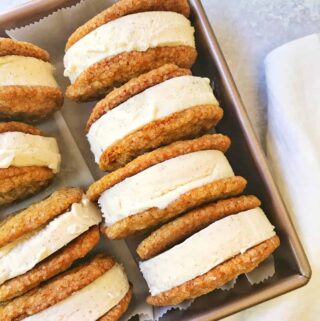 Hi, I'm Abbey - the coffee-centric foodie behind My Casual Pantry.  I love casual, comfortable food - the food that we share with our families on a daily basis, the food we build memories around.  I'm here to share my love of food with you and provide you with recipes to build memories with your family.